Yeastie Boys – Red Rackham –  Brewed at Invercargill Brewery, this one in the style of a Belgian Ale. 330ml bottle thereof, 6.8% ABV therein. 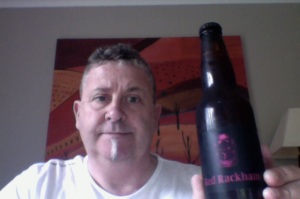 Red Rackham is a redoubtable red ale whose unique character brings back swashbuckling memories of our past seasonal releases ’Plan K’ and ’Return to Magenta’. Another style bending ale, it is rich and strong with a good deal more hop than the average Belgian ale and far more funk than the hoppy new world ambers. Pop a cap now on this limited release rogue ale and discover the secret treasure hidden within… or bury a few bottles, draw yourself a map for future reference, and rediscover the bounty in coming years.

I’m looking stunned as a mullet. It pours a fantastic orange golden with a decent head, I knew I’d get than hang of it. It’s a bit hoppy on the nose (he said with a nod), and I head dissipated in a moment…. Crash!! there’s a bucket of flavours and sensations in this, that’s a bit good!

There is some sweet notes, and the sours of the hops. This owes a lot to it belgium style, and it carries it off with aplomb.  The longer it sits in the glass the warmer of taste this gets, you could easily get involved with this in a longer term relationship.

The pdubyah-o-meter finds a lazy 8.5 on this, which by the new improved arbitrariness of things makes this a pretty fine beer.  I’m smiling a goodly bit at finding this, being surprised that it was a Belgium beer, (I didn’t have by reading glasses with me and didn’t read the label), being surprised that it was a chuffing good Belgium beer by that measure and only disappointed by the mini-me sized bottle :-).

This would stand a good comparison to many Belgium beers and if you’re into that get this, I make a rare recommendation to try on the basis that I’d probably give you your money back if you didn’t like it.