Left Coast Voo Doo American Stout Brewed by Left Coast/Oggis Pizza and Brewing Company
in the style of a  Stout, and normally you’d find them in  Del Mar, California USA, but tonight at my table. 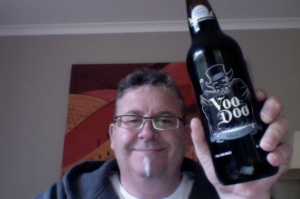 At Left Coast Brewing Co. we pride ourselves on a unique batch of beer in the style of an American Stout. Voo Doo is a full bodied, dark brew that is rich and malty with plenty of roasted barley character. This hearty stout is layered with flavors of roasted barley, chocolate, and coffee coming from the highest quality imported malts. Its creamy long lasting head completes the brew, tempting your taste buds to be spellbound. They say Barley twice so I’ll be a looking for that.

Initially I couldn’t pick the aroma, but then it settles to a pleasant chocolate. Deep dark colour with a mocha head of some substance.  Bittery chocolate initially, but with a nice malty back, not so long a taste though, and you get left with that bitterness.

It’s not bad though, fairly solid, unremarkable and very drinkable.  The pdubyah-o-meter wants to cut straight to the chase and say 7.25 arbitrary things from it’s equally arbitrary scale.