The Liberty – Yakima Scarlet. Brewed by Liberty Brewing  In the style: American Strong Ale and they do that of course in New Plymouth, New Zealand

Of course. It’s been a while since I had a new beer to drink about, and time to get back on the horse. 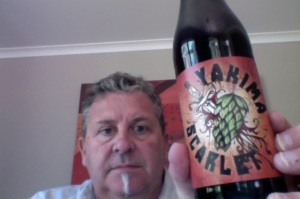 They say “My original records for this beer date back to a batch of home brew in June 2007. It was a beer called IPA Massacre. It was brewed three times under this moniker with minor tweaks along the way. The most significant tweak I made to the recipe was changing to use hops grown in Washington USA. Accordingly, in January 2011 the name was changed to Yakima Scarlet. There were no less than seven iterations of this beer brewed before releasing what you hold in your hands right now. I still don’t what style of beer it is, but I can tell you that it is hoppy and it is red.”

I say… 500ml bottle of 6.9% ABV beer, that’s 2.8 Standard Drink units,  here I come… and I’m  expecting a  beer with a history of chop and change but that with American hops should make it a mouthful…

It does have a bitter hops aroma, a fluffy dark head (a head yes!) and decent carbonation, it’s all happening. When I say bitter aroma, I mean pungent because the aroma is sweet malty sweet.

The beer is a dark red, not stout dark, but burnt brown dark, it’s really a very pretty thing.

And the taste is to amaze at, there is a balance between the hops and the malts that brings a smile to the dial, this at first flush seems to be the goods.  This isn’t like any “red ale” that I’ve ever had, and I don’t profess to be any kind of expert or aficionado, but this is nice as is.

As it sits between sips though the hops take a hold and push the malt sweets to the back, but overall this is a bit of alright. The pdubyah-o-meter says 8.25 arbitrary things for this, not because there are things wrong with it but because I’d prefer the malt to hag around for a bit longer.

Very good, I’m off to cook some lamb, and watch some cricket, and smile .