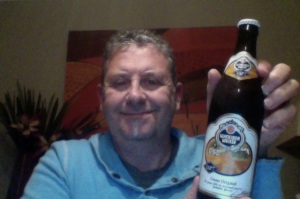 With its amber-mahogany coloring and streaked with fine top-fermented yeast, this beer has a fine, persistent head that adheres well to the glass. It is pleasantly fruity with a typical top-fermented smell, an aroma of clove and nutmeg apple tantalizes the nose. On the tongue it is fresh, clean, full-bodied, harmonious and well-balanced. It finishes with a light, delicate taste of bitters leaving behind a sour impression.

Sort of both sweet and sour aroma on opening, It’s a much darker beer than you’d expect, and it has a whopper of a head. The aroma stays the same, sort of a sweet malt but with a peppery thing going on.

Although you’d think that there’s a mouthful of sweet malt this isn’t exactly what happens, you get a warm sweet that somehow turns into a sweet bitter. I’m a bit betwixt and between on this. It’s ok, the taste is good, but there isn’t a lot of length in it. It then occurs to me that this is a “dry” tasting beer. See sometimes I get it!

I don’t know however if I get the alleged “banana” or “vanilla” that might be expected, it would have been something to have experienced.

Probably more a summer beer than a first of winter tipple, but this is an easy drink, there is nothing that is offensive or that you’d find distasteful, and I can see why it’s successful .

The pdubyah-o-meter says I should rate this at 8 being as how it’s all a bit good but not spectacular. If I had a mind to have a party I’d probably get some in because it’d go down well. The nice caramel note invites you in and the little sour back means you’re actually enjoying  and experience.  I had no trouble drinking this, and I know lots of people feel the same way.