Funk Estate “Oh Lordy!, for the label – So then the Funk Estate Brewed at Aotearoa Breweries in the style: American Pale Ale and of all the places I’m not Wellington, New Zealand. 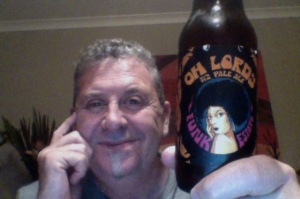 Oh Lordy” is Funk estate’s NZ Pale Ale, or a kiwi twist on an American pale ale. It packs a light colour and body with nice floral and citrus aromas. This is smooth and mellow but nevertheless pleasurable which gives rise to the “Oh Lordy” title.

Couple of things to ponder. Why the small bottle? And just Why?

There is nothing is particular on opening and I made such a comedic sniffing effort!, Clear brow pour and……. no head. At all. nothing. You could skate on that. It looks flatter than a pancake. (or other simile )

There might be a faintest of faint aroma of something malt. But  Oh this is dead in the water beer.

The pdubyah-o-meter does the opposite of crank up from the get-go.

Gak. It’s flat.  What the heck is wrong with this. Well, Sherlock, it is flat, and it’s atrocious.

It’s horrible and and end should be put here. The pdubyah-o-meter gets to 1.  I have my head in my hands, this is worse than than a worse thing.

I’m going to put his behind me, and pretend that I haven’t been had.  Avoid. I’ll pay you to avoid this, there was a problem in the bottle processor something. shameful quality control.

The Brewer can call me, or twitter, email, facepage whatever, until he does I’ll despise this and be dubious about anything else they crank out and chip away at the man in the shop …. said “Angry of Mayfair” .

I’m off to try and kick the cat and swear.