It’s Thursday, a work day, and I’d put my empty bottle in the car hoping to fill it tomorrow. But being how as I’m easily lead I’ve stopped off at the Liquorland in Newmarket and picked up a litre of the Panhead Customs Days of Thunder, a US  style IPA with an ABV of 7.7%. A one litre bottle then is about 6.8 standard drink units in NZ (4.34 in the US, and 7.7 in the UK) 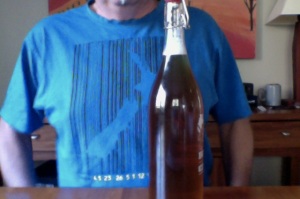 Brewed by Panhead Custom Ales in the style of  an India Pale Ale (IPA) and they’re in Upper Hutt, New Zealand.

Possibly named after the 1990 race car movie starring Tom Cruise, or a type of engine.

It’s much more yellow and pale in the real as opposed to the picture. Trust me .

Explosively hoppy aroma, nice pour but a little shy on the head, again the colour is much more pale, almost cloudy.

Brilliantly bitter, with grapefruits and citrus and a reasonable carry with this. Not so bitter that you frown but more one that introduces itself with a firm handshake, which is preferable.

Really very quaffable, the grassiness of the hops coming more to the fore, but not in that way that blunts your tongue and kills off your taste buds.

Drinking this I was reminded of this picture. Which I found to be very needful.

As you can see had a bit of a make-over.

Nothing to do with beer, or panhead engines, which are a Harley Davidson thing but you knew that.

But nethertheless a bit needful.

Moving on. The pdubyah-o-meter says this is a cracking beer, and rates it well at 8 – very good, on the random scale of all things.

Nicely done, not too overboard, very bold, and you’d be surprised at the high ABV rating that seems to just pass you by. Thursday night sitting in the evening sun got a whole lot more pleasant.