I can’t help it that I’m easily led. This time astray by the Ballast Point – Sculpin IPA. In a one litre bottle from the taps take-away style. Comes Highly recommended. Brewed by Ballast Point Brewing Company in the style of an India Pale Ale (IPA) and of course near Sea World in San Diego, California USA.

The Sculpin IPA is a testament to our humble beginnings as Home Brew Mart. Founded in 1992, the Mart continues to be a catalyst for the San Diego brewing scene, setting the trend for handcrafted ales. Inspired by our customers, employees and brewers, the Sculpin IPA is bright with aromas of apricot, peach, mango and lemon. Its lighter body also brings out the crispness of the hops. This delicious Ballast Point Ale took a Bronze Medal at the 2007 Great American Beer Festival in the Pro Am category. The Sculpin fish has poisonous spikes on its fins that can give a strong sting. Ironically, the meat from a Sculpin is considered some of the most tasty. Something that has a sting but tastes great, sounds like a Ballast Point India Pale Ale. 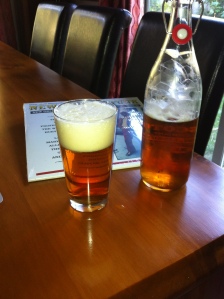 Accompanying me tonight is music from New Orleans: The Original sounds of Funk 1960-1975 on the LP Player, and for which I paid far far too much New Zealand money.

Lordy that was poppy when I popped the top. Mellow rich hops aroma.

As you can see, head! lots thereof.

But wait. This isn’t anywhere need as puckeringly bitter as the last beer I had, the Panhead Days of Thunder, but it’s much more caramel and malty balanced.

So although there is a grassy hop note with some grapefruits\grass it actually drinks a bit mellow and, dare I say, thin. For a beer that rates as highly as this I again wonder if I’m doing this right.

It is very very drinkable and this is one of those non-threatening beers that’ll keep you in good company, you’re not wandering too far from the middle. Safe.

Not what I expected. It’s defiantly a session beer, you could be happy with this all night, and possibly the next night. There is enough to remind you you’re drinking a decent beer, but not so much that you’re ruining your palate. It is fur sure light drinking.

So what to make of that. This really is highly regarded, and IPA is, only in my opinion, a safe to make beer, the fact that the everyone does it should indicate that it’s a something.

Is it a beer I’d rave over? I don’t think it is. I like safe beers, beers that offer up a profile and engage you, without worrying you and testing you. This though is a bit like a comfortable cardigan, a bit thin and worn. The pdubyah-o-meter rates this as a 7 being good.

I wonder if the idea that harsher and harsher beer is a path that you end up taking, more IBU’s more more, instead of thinking about a balance and drinkability. Trying to find an extreme, I may have voiced this before. The Ballast Point Sculpin is a good beer, and I’d happily forego many other beers to have this on a night out, you’re going to get a buzz on, and you’re not going to end up with that horrible full mouth carnage. This is a bit bitter, a bit sweet, had a bit of carry but not much and ends up being all supped and gone before you know it. That is it’s strength, it’s doing a clever thing very well.

Perhaps this is the benchmark and I’ve been harsh. I’ll have the other pint and decide later.

The New Orleans Funk was ok, although the idea that you can only get 12-13 minutes on a side of vinyl is a bit low-rent and frankly awkward, I’d rather a good old fashioned full side of music, which should be more than 4 tracks, perhaps 8 and 23 minutes? At least they are 33rpm and not 45rpm versions. The clarity and quality faultless, danceability a little low, but I could get my groove in if I didn’t have to stop every few minutes to flip the thing, or reset the needle on the groove. Unlike many vinyl records does not come with a MP3 download or CD thrown in, so I can’t enjoy this and enjoy it in the car. Would I spend another NZ$50 on the volume 2 or 3 ? I might, I’d blanch at the price but I just might.