Iron Maiden inspired  and Brewed by Robinsons in the Style of a  Premium Bitter/ESB
Stockport, England, it’s Trooper! They also made the Elbow beer that I wasn’t overly in love with.

Onward, Onward
Rode The 600…
The Charge Of The Light Brigade, which inspired the Iron Maiden song The Trooper, took place at the Battle Of Balaclava (1854) during the Crimean War when 600 British cavalry courageously charged the massed Russian artillery. This gallant but foolhardy assault resulted in a massive loss of live and came about due to a misunderstanding of an order given by the commanding officer, Lord Raglan. 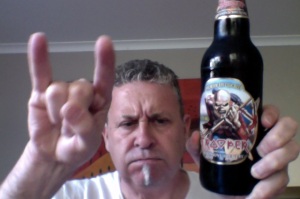 Trooper is a premium British beer inspired by Iron Maiden and handcrafted at Robinsons brewery. Being a real ale enthusiast, vocalist Bruce Dickinson has developed a beer which has true depth of character. Malt flavours and citric notes from a unique blend of Bobec, Goldings and Cascade hops dominate this deep golden ale with a subtle hint of lemon.
http://www.ironmaidenbeer.com

So it’s a welcome to the Jungle for this beer, difficult to get in NZ, will I have found what I’m looking for?  Looking for a whole lot of love from this, and hoping I won’t get fooled again.  Desperate that this does not smell like teen spirit, or smoke on the water, hopefully it’s the ace of spades and I won’t run for the hills, so perhaps Thunderstruck,

But enough of that stupidity…

Sour bitter note and a little thin, however…. it seems to have a fairly nice malt carry. So although it’s a bit tangy it’s also a bit drinkable.

The pdubyah-o-meter things that this should be a 6 it’s there in the above average beers, compared to other English beers. It could do with more body but overall it’s not unpleasant to unenjoyable.

Confession time, I’ve never knowingly heard an Iron Maiden Song so I googled one. But I could have reviwed it without listening to it 🙂