The Vandal is Brewed by Panhead Custom Ales in the style of an  India Pale Ale (IPA) and they’re in Upper Hutt, New Zealand 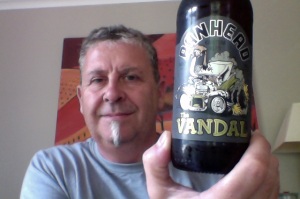 Not only did the Americans invent hot-rodding, they invented hop-rodding too.
In the late 1960’s a Tauranga teenager called John Reid threw a kiwi hat in to that ring with the the famed “Vandal”, a dazzling green flake 1919 Dodge Bucket.
In his spirit we are rising to the other challenge with a beer named in his honour – a big, bitter APA stuffed with the tropical hit of Nelson Sauvin, Kohatu and Riwaka Hops.

Like any good hotrod, it’s built to attract as much attention as possible.

On of the best labels I’ve seen on a beer for a while, silver and green foil highlights. Nice work I hope that the label isn’t the best of the beer.

Goodly aroma of hops on opening with a whisper of carbonation. Pours a fantastic orange golden with a reasonable head.

Banging amount of hop taste with a decent length and lingering finish, I had to take another mouthful as I was enjoying it so much.  Instant regret that I didn’t get two. 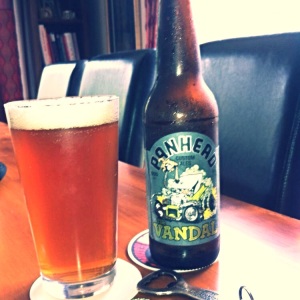 Nice floral aromas coming through, fantastic balance in this, it’s a bit good.  Compared to the previous couple of beers I’ve had this is a different league. The bitterness is carried by a lovely caramel warmth, the finish is towards dry but not so much that you’re palate is overwhelmed by it.

I’m beginning to wax lyrical about this, and trust me it only gets better the more you drink. The pdubyah-o-meter really does think this is an instant 10. I don’t give them away daily.

Without doubt the most outstanding pint of beer I’ve had in a few days 🙂 I haven’t mentioned this for a while but if you like IPA or DIPA, and you buy this and don’t like it I would give you your money back. You might not think that it’s a 10, but I bet it would be in the top bunch of beers that you would recommend to people, and you’d probably sneak one into the fridge for those days when you wanted class over something new and unknown. I wish I’d brought two, I’ll probably buy another one tomorrow. 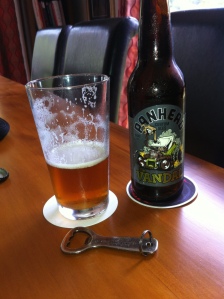 This is then very very easy drinking, very very easy to enjoy and no effort on the palate, no effort to pick a flavour or note, and altogether something a bit good. Great colour, pours with a head, leaves some lacing, and leaves me wanting more .