In a bottle this time, Ballast Point Sculpin IPA, Brewed by Ballast Point Brewing Company in the  style of an  India Pale Ale (IPA), and of course in  San Diego, California USA 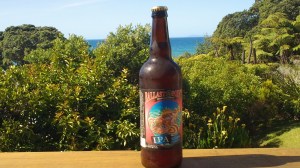 This is a 650ml bottle of a 7%ABV beer,  with 210 calories, a serve I guess. 70 IBU things which is right in the mid point for Pale Ales. 3.6 Standard drink units, best take it easy if I’m also cooking tonight.

The Sculpin IPA is a testament to our humble beginnings as Home Brew Mart. Founded in 1992, the Mart continues to be a catalyst for the San Diego brewing scene, setting the trend for handcrafted ales. Inspired by our customers, employees and brewers, the Sculpin IPA is bright with aromas of apricot, peach, mango and lemon. Its lighter body also brings out the crispness of the hops. This delicious Ballast Point Ale took a Bronze Medal at the 2007 Great American Beer Festival in the Pro Am category. The Sculpin fish has poisonous spikes on its fins that can give a strong sting. Ironically, the meat from a Sculpin is considered some of the most tasty. Something that has a sting but tastes great, sounds like a Ballast Point India Pale Ale.

I rated this as Good (7) last time I drank it, I felt then it was a comfortable accomplished beer, I wonder if the bottle version will be different/better.

Having achieved some exercise to an acceptable level I deserve this.

Popped with a little pop, and a burst of soft grassy hops, and sweetness. Golden orange glowing pour wit ha decent and persistent head, on a roll here with this tumbler!

This is another of those bitter beers that isn’t pucker-up bitter. There is lovely tang in it, but it carries you along on a bit of a journey, a lovely journey.

The bedrock is a lovely warmth that carries the happiness and gives you a full mouthfeel, a bit of a carry and a nice finish.

I said before that this was a comfortable beer, one that does not take you near the edge, but at 7% ABV could get you into trouble if you thought it was going to be a session beer.

I still think this is a comfortable beer, I’m still not sure that it’s as brilliant or outstanding as some people believe. Might be worth a taste off between some of them to set a bar or benchmark on how I view these in future. 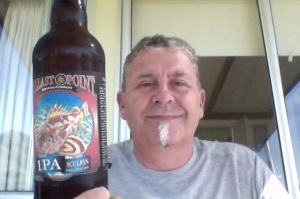 I get some of the lemon flavour, I’m not convinced on Peach or Apricot or Mango, but might get passion fruit if you had to twist my arm.

The pdubyah-o-meter like the bottle version at a 9, high praise, making it a great beer. Which is because it’s drinkable, gives you a bit back by way of taste and layers, is easily  enjoyed and reminds you that sometimes the day is to short to drink bad beer, or drink bad beer where you have fret and frown about what it is the brewer thinks he was doing.

This is a fine beer for a summer evening, looking at the sea, contemplating the seafood about to go on the barbecue, The only thing missing would be some decent music, but failing that I have Birdy.

I shall remember this beer as a beer for this #summer with great affection I think. Cheers.