Well it’s a Friday so Hallertau Hopocalypse IIIPA 2014 it is! Four Horsemen Of The Hopocalypse – 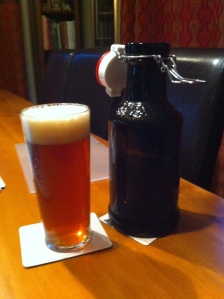 Four Horsemen of the Hopocalyse – a collaboration with four of the most hop driven brewers in New Zealand. Joseph Wood from Liberty Brewing, Steve Plowman from Hallertau, Kelly Ryan and Luke from Epic. Could you add anymore hops to one beer.

This is listed as brewed by Epic Brewing Company (NZ) in the Style: Imperial/Double IPA, and they are in Auckland, a ways up the road in Riverhead. I could visit anytime I like. Or I can drink at home 🙂 They have a fine restaurant.

It’s almost sweet smelling on opening, there’s not much giveaway if this is a hop monster beer.  Aroma really kicks in on opening though, pours fantastic burnt orange and with a fluffy head that dissipates but seems to persist a bit.

This is a lot sweeter than you could expect it to be, seems to have a lot of  caramel malt thing going on, which is interesting.

There is the alcohol that you can pick on the top, it’s pretty obvious if you were wondering, and it lingers and finishes a bit tart. But hey it’s a big IBU beer and these are things that you could be expecting to happen it shouldn’t be a surprise.

This might not be the most sensible thing I’ve ever drunk, particularly pre-dinner.

The Pdubyah-o-meter ticks up a tad, makings this a 7.5 which is better than good but not  on the podium for medallists.

Watching the Formula 1 practice on the teevee. These new V6 cars are like sewing machines compared to the thunder and lightening that was last year. You can hear the tyres squeal and the turbo chirp. I guess that’s a good thing, but I prefer the noise. Someone should invent an app.

I know it’s important to round this off with a couple of things.

Am I enjoying it?  Yes I am, it’s both sweet and bitter, and a bit quaffable despite the misgivings about the alcohol astringent
Would I have another?  I do have another, and I’m looking forward to it. I may have the munchies later though.
Would I share with a friend on a porch and set the world to rights? Yup.

On the drive home I was listening to Muse, loudly. I’m sure I look odd in the car with this dialled up to 11