Going the double then – St. Austell Tribute – obviously brewed by St. Austell this one however in the Style of a : Bitter and they are in the romantically named St. Austell, England.

Of course being Tribute I did my own tribute and  Googled it – St Austell named for  Austol – a  6th-century Cornish holy man who lived for much of his life in Brittany.

He was a companion of Saint Méen in the foundation of the Saint-Méen Abbey in Brittany. Meven is said to have been his godfather. The parish and town of St Austell in Cornwall is named in his honour. He is regarded as a saint, with a Breton feast day of 28 June and a Cornish one of the Thursday of Whitsun. 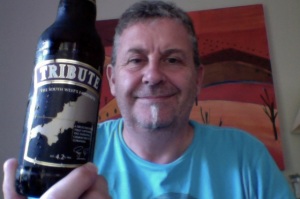 St. Austell’s most sought after ale is available as a 500ml bottled beer. It’s perfectly balanced flavour retains much of the cask versions unique hoppy palate and citrusy nose. An ale to savour and a real Cornish ambassador. Rapidly becoming “the” Cornish Premium Ale, this great beer can now be enjoyed outside of the county of Cornwall. Many supermarkets take Tribute, enabling those who enjoy drinking at home to enjoy the true taste of Cornwall.

This has a strong bready note on opening,  Pours more orange yellow and not what was I expecting which was perhaps a dark beer (dark label therefore…. )  Head fades away quickly.

Underwhelmed is what I am, aside from this having more malt in the backbone there isn’t anything that you’d tip your hat to.

The pdubyah-o-meter says again 5. Average.  But that this makes commercial sense must mean that they know their market.

I wish I’d picked something else in my fridge to be honest.

A gold to copper color, low carbonation and medium to high bitterness. Hop flavor and aroma may be non-existent to mild. Great to drink with steak and lobster.