The final of the 3 that I have   – St. Austell Clouded Yellow – obviously brewed by St. Austell this one however in the Style of a : Belgian White (Witbier) and they are in the romantically named St. Austell, England.

Pale yellow in color and naturally conditioned in the bottle, the beer may be poured cloudy by gently swirling the last few inches to rouse the natural yeast sediment. 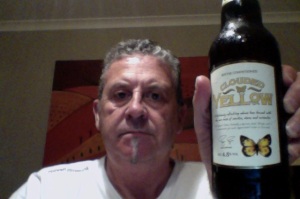 Alternatively, clear beer can be decanted carefully leaving the yeast behind. Either way serve cool in a tall glass for a superbly refreshing wheat beer of character and individuality. Only natural ingredients are used including our own supply of exceptionally soft Cornish spring water. Malted wheat produces a beer with a citrus tang which has been delicately flavoured with whole spices and vanilla. The combination of flavors is brought alive by gently sweetening with pure organic maple syrup.Ingredients: Maris Otter pale malt, whaet malt. Willamette hops. Vanilla pods, cloves, coriander, maple syrup.

I really don’t have much hope for this, and I’m a big fan of the Belgium beer

I get a bananas as the aroma on opening, what’s with that!. Cloudy pale yellow poor with an immediately disappearing head, although it sounds like it is well carbonated.

Aroma settles to something more nondescript.

So I’m not enjoying it then 🙂

Said though, this isn’t undrinkable, and on checking it is past it’s best before, but not so much that it would the disaster that is in my glass.

The Pdubyah-o-meter rates this as a please avoid – 3 – on the scale of arbitrary, which is at the high end of avoid, and lower than below average.

and in reference to the no more beersies this :

Belgian style wheat beers are very pale, opaque, with the crisp character of wheat, plus the citric refreshment of orange peel and coriander. Ingredients sometimes also include oats for smoothness, and other spices such as grains of paradise. Serve with light cheeses or mussels.