Another Red Ale after the one last night – this is the Aotearoa Mata Volcano Red IPA.

Brewed by Aotearoa Breweries in the style of an India Pale Ale (IPA) and they’re in Kawerau, New Zealand. Best part is that they have a woman, Tammy Viitakangas is  Head Brewer. Feel bad about pointing that out but hey it’s unusual and to be applauded. 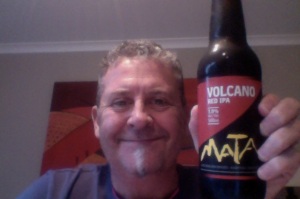 A New Zealand style Red IPA packed full of toffee and caramel malts that burst out along with an explosion of citrus hop flavors and solid bitterness.

WARNING: May set your taste buds on fire.

Grassy sour aroma in the glass.  Surprisingly bitter, even though it was hinted at, and the sweetness is of a different colour .

I started really liking this and then I stopped to be less effusive. If anything although this is bitter it’s also burdened at the same time with sweetness and caramel in equal measures and amounts, it’s all one thing, which drown both things.

There seems to be a cloying over-riding toffee sweetness that stats off intriguing and then turns and bites you. Then next time up it’s more bitter.

So a beer of many things. I drank it all, It took most of the Album of music, as they always do, and at 7% it makes itself known that you’ve had a beer of some substance .

The pdubyah-o-meter rates this as 7 a of its things from the thing. It’s a nice beer to drink and enjoy, and I think I’d buy one in the pub if that’s what they had. I don’t know I’d fridge one though.

I thought the Red IPA was a new thing, I think I also might have had the best one first, but then what do I really know.

Also made bread today –  It’s a hamburger bun recipe that makes brilliant dinner rolls that I’ve many compliments about. I add italian herbs, they’re very popular with the household and others who have them.  Chuffed the little loaf thing worked out 🙂 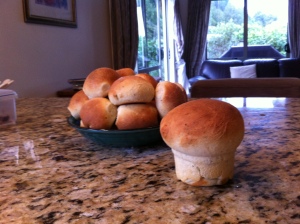