More Properly – McCashin Family Coconut Vanilla Pilsner. And being a sucker for a lot of nice words my basket became one with this.

Brewed by McCashin Family Brewery in the style that is a Pilsener and they are in Nelson, New Zealand

Found throughout the tropics, the coconut is an iconic fruit renowned for 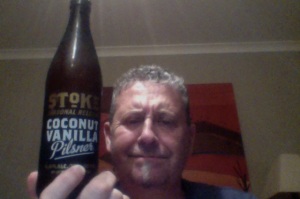 its versatility, while Vanilla, with its roots in Central and South America, has a similarly long list of applications. When combined with the skills of our resident Czech brewer, Ondrej Vojta, they conspire to create a well-balanced, creamy-smooth beer perfect for sunny afternoons! Crisp, zesty hops and the unmistakeable aroma of roasted coconut and vanilla blend seamlessly in this golden Pilsner, best served ice cold for that tropical, refreshing taste!

Serve Ice cold. That could be a good thing or a bad thing. Ice can subdue a lot of flavours.

That is a  lot of coconut aroma, it’s like candy sweet and I get cherry, of course. It might be a sweet beer. 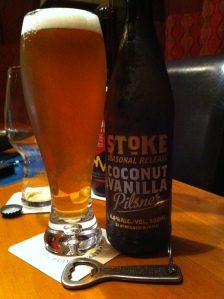 Pour is really pale yellow, although it looks more orange in the glass. Funny thing.

Aroma is vanilla!! It’s like ice-cream and there is no reason I though cherries. Just being me.

It is however neither coconut nor vanilla, just some hybrid of the two.

Not that it’s not nice, it’s just not either.

So on the nose, a lot of vanilla, on the palate not so much. There is a wash of coconut on the tongue on the way thought, and this is the lingering taste. The bitterness is low and there is a slight bitter finish.

Would I crank up the bitterness? I don’t think that would work, clearly this has been thought through as a thing.

Have I drunk it all, pretty much yes.  Have I written a lot of 5 word sentences, and some 6 word ones? Yes I think I have.

The pdubyah-o-meter rates this as 7 a of its things from the thing. This is quirky, and perhaps in a good way. I think that as a ‘lager’ this has put a smile on my face, and I’m actually happy that I had a drink of it. I might even put one in the fridge and have it another day if I was being honest. Sometimes you want a ‘sweet’ beer that satisfies both your need for a drink and ticks off the need for a sugar hit. But this more a lap dog than an attack dog.  As a Pilsner it misses, as a refreshing lager beer with a twist it’s ok.