Never been able to do things in the right order and so finally I managed to puy the first chapter of 3 beers – Eagle vs Dog – Episode 1 Hitch-Hikers Guide Pilsner. I’ve previously drunk the Episode 2 and more recently the Episode 3 offerings

So for Golden Eagle Brewery brewed at Raindogs Brewing Co: this is brewed in the style that is  Pilsener and they’re in Christchurch, New Zealand 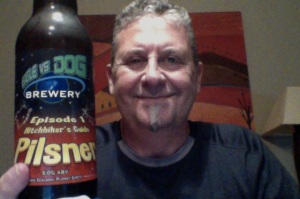 Born from a melding of cultures whilst on the run from the Vogon fleet. Utilising brewers born under the Long White Cloud and St George’s Cross. Incorporating German and Canterbury malts, devilishly Tasmanian hops, shaken not stirred Christchurch artesian water and a very Bohemian Czech yeast. A truly complex Pilsner guaranteed to take your taste buds on a trippy voyage to the end of the universe. Don’t forget your towel!

Nice aroma on opening that is yeast and sweet.

Pour is very pale, almost transparent but is a soft golden yellow, and there is little by way of head, and what there is leaves.  Colour is nice and even.

Aroma I get something like grapefruit, is that normal, and something sweet. 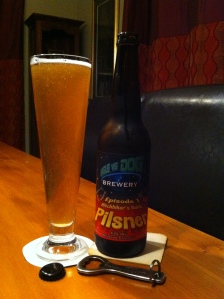 Oh that’s quite interesting in the mouth.  Soft and muted carbonation despite it looking lively in the glass. A wash of bitterness that is fairly persistent and an overhead of fruitiness. Hop bitterness is lingering, and adds dryness but I mentioned that.

What happens next? Well this does  change with time in the glass, the hop ‘roughness’ doesn’t eventuate and this seems to change to become a bit thin.

So this lacks ‘crispness’ and at the same time seems to lack the edgy hop bite if that makes sense.

I Was hoping to enjoy this much more and continue with a renewed appreciation for Pilsners, but this might have dented that somewhat, which is a pity.

Anyhow that’s all 3 knocked off.

The pdubyah-o-meter rates this as 7 a of its things from the thing but that should be taken as top end of average and not good.  I wanted to be more ref refreshed and have a beer that bit back a bit more that this does, and only in my head do I know why, I think I over expected, misunderestimated my expectations or just plain don’t get Pilsners.

Soulful kind of evening, so I start with  Rebecca Ferguson – “Nothing’s Real But Love” – and that can be found on the album “Heaven”