I love creative names and this is no different – Two Fingers Joan of Arc Smoked Pilsener, and so I’m back to back in Pilsners this evening.

This on is brewed by Two Fingers Beers Ltd. this is in the style that is described as Smoked or even Pilsener and they are in Tikitere Rotorua, New Zealand

Joan of arc was born Jan 1412, a peasant girl in eastern France. France at the time was being invaded by the English with support from the French Burgundians. Apparently in 1424, the wee lassie started having visions from God, whom, it would seem, was in support of Charles VII claim to the throne. Now the English, unaware of Gods political affiliation, lost several battles to Joan’s teenage leadership of the French army. Eventually, captured by the Burgundians and burned at the stake for heresy in May 1431 at the age of 19. Her bones were burned 3 times over to ensure nothing was left, for souvenirs I guess. 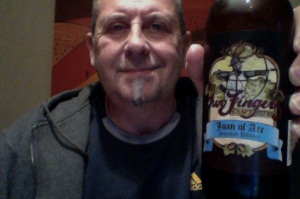 The Joan of Arc- Smoked Pilsner.
A lightly smoked pilsner, as a tribute to an extraordinary girl. The malt and hops balance the smokiness, so the smokey flavour is there, but not too ‘in your face’. This is a flavoursome crisp beer which can be enjoyed with fish, spicy foods, cheese and great with sushi. At 5.7%, enjoy it, but if you too start having visions, you’ve probably had enough.

Mixed reviews on this, but it had two things going for it, Pilsner, and comic name. I hope this has some bite and smokiness that makes sense. Otherwise I’m going to be miffed. 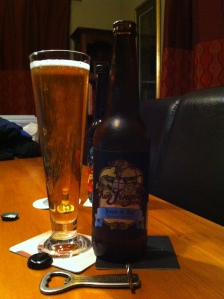 it is very lightly smoked which also has chocolate about it on opening.

Pale and very clear pour with small and persistent thin head, looks lively and well carbonated in the glass.

Smoked is defiantly in the aroma, and if you try hard there is some hop note, try hard….

The result in the mouth is a confusion and melange of flavours and experience that weirdly works out a bit good.

Bitterness is nice, smoked over note is great, and this is crisp and clean drinking as well. Very clever.

Very drinkable too, very and that is ok in my books. Well sometimes, I’m going to suggest that MrsPdubyah pick me up some of this in the Supermarket when she’s a mind to. Won’t happen but I’ve had beer so I’m brave to ask.

This is a peculiar thing, smoked pilsner, and in that way that sometimes hits the bullseye this one really finds a spot with me. Like one of those weird ‘sour’ beers that were once uncommon, they are in and of themselves a thing of beauty, although with this there are no warts that I can think of.

Which isn’t true because I can. This is far too easy drinking, which probably means that it’s sweet, and it also really lacks a hop body and back, doesn’t have much carry and there isn’t a finish of anything, no dryness, no nip in the back, nothing, it’s just quaffing beer.

Quaffing beer, I think I have new favourite.  You have one of these you get a decent beer, a bit of flavour and a nose full of things on the way in. Plus you get the haze on.

That I like doesn’t mean you would, but I’d be willing to test our friendship with this and I know a KingMidget that I bet would find this a revelation in beer. If only it was downloadable…

The pdubyah-o-meter rates this as 9 a of its wheel of fortune, making this a great beer, a real find and a bit good. I really am wrestling about making a 10 but the dial does’t move.  It’s weak as a pilsner on the hops, and the bite, but as a drinkable and enjoyable beer it’s the bees knees.

I finished it 😦 and I can’t have another until another day.  I am pleased I found a supermarket and not beer shop that stocks a winning beer, it makes for a winning combination.

I’d be happy to put my own money up on a you buy it and hate it I’ll pay you back on this, despite it has shortcomings there are things that make this just irresistible.