Beer from Portland – Gigantic Volta – Brewed by Gigantic Brewing Co. and it’s in the style that is a  Saison and I gave the game away before but they’re in Portland, Oregon USA ‘Murica 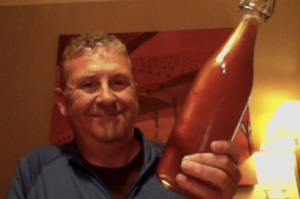 A word sonnet: Volta is a delightfully spicy, fruity summer saison, yet a beer for any season.

Weirdly we’re having a late dash of winter blues, it’s cold, wet and windy outside and so a summery beer seems a bit at odds.

Her’s the label art,  just in case, for no reason, and because this was on tap and not in glass.

Well not in a packaged glass,  if pedantic is called for. 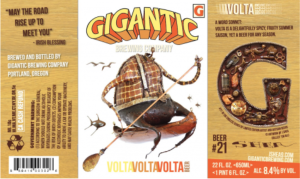 It kooks like a rich orange colour in the bottle,  The aroma is like lemon, or soft stone fruit;

It’s a lively pour, and that’s not my poor skills, I think it’s a given, given the style. I’m always up for being corrected though.

The froth is interesting in taste. Fruity. 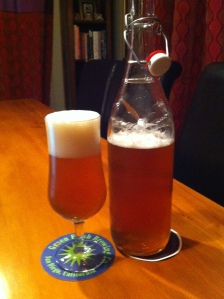 Woah, that is nice. That full mouthfeel, soft, sweet and fluffy. Very engaging, very encouraging. The alcohol though is there in the background waving and kicking-off though like a hooligan. as this starts well in the mouth and ends on alcohol note and heaviness.

This is loaded with sweetness that somewhat drown out the rough edge hops that you might be expecting at the front of the taste, and that lulls you into quaffing as it appeals to the sweetness of my palate.

I like it quite a bit then as a good drinking beer for an otherwise dull afternoon at the end of winter and just before spring can get a hold.

I’m not sure what else that I could say except that it looks great in the glass, even the second time around, I mean it sits well loads of foam and head. No tacky after-taste, no tanginess, but that’s offset by the fact that there are not that many complicated things going on in the quaffing stage for the after-match to be all engaging and interactive.

But, if I get to Portland keep a seat open at the pub because…. incoming!!!!

The pdubyah-o-meter rates this as 9 a of its things from the thing. I like it, despite that it might lack dimensions and layers, what it is is a good beer done goodly, and that makes it ok by me. It makes me smile, it brings me to a happy place, and I have some goodly music going on in the background that just makes this little bubble something nice.

I was listening to a few things, but settled on “The Police” and this came on, of course, Message in a bottle…..