I am pushing the boat out, with a new to me brewer, and at random this, the – Karl Strauss Big Barrel Double IPA

This is brewed by the Karl Strauss Brewing Company in the style that is  Imperial/Double IPA and the are based in San Diego, California  USA

650ml bottle that is 9%ABV, and a matching 90 IBU things, 270 calories a serve, and that would be 4.6 standard drink units in the one bottle

When we kicked-off this series of intense hoppy beers, we wanted to go big.

Aggressive amounts of Warrior and Ahtanum hops produce an assertive bitterness that stands out against a firm malt backbone.

Balanced even at 90 IBUs, Big Barrel leaves a considerable first impression that serves as a prelude of things to come.

Note to self: Point beer away from keyboard and in general the laptop when opening, you know that the last beer cost me around NZ$300 to fix, the good thing though, if anything is that it’s a Mac and therefore same day repair

Anyway, what could possibly go wrong this time?

Loud sweet hop grassy aroma on opening, like it already just for that. 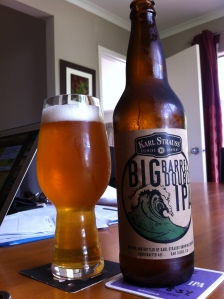 Much more golden orange that I was somehow in philipland expecting, and it pours with a a lovely finger of white fluffy and persistent head, it looks the part!

You get this massive burst of bitter followed at a rush but the biggest burst of warm sweet malt and it’s really really something!

Grassy hoppy dominates and it has a great finish that is somewhat towards to dry but not rasping and overwhelming.

It has lovely pine and citrus (lemon) and that great softness in the middle, I really wanted a good IPA, took a punt and won! Go me!

Despite it’s 9% ABV which will see you in bed early if you’re not paying attention, and despite that there is no real indication that it is a reasonably high ABV beer, this is one of the easiest drinking dIPA’s that I’ve had for ages, and it brought a smile to my dial, made the world a better place, and restored my sense of balance. It’s that good

The pdubyah-o-meter rates this as 10 a of its things from the thing. I’m usually a bit shy on elevation to the 10’s as that really does leave you open to question and ridicule, but this really hit my sweet spot, and today in this light and at this moment, this is as perfect as it gets. And I drank it before the curry arrived.

Musics? Well I was whipping up a couple curry meals, a Butter chicken for the others and a Jalfrezi style for me, and  I stumbled over  a band called “The Coral” and a track  “The Curse of Love” from the Album of the same name. The Coral are an English band formed in 1996 in Hoylake on the Wirral Peninsula in England.

Light Indie Pop type but with some good lyrics and nicely produced, It’s very good listening to and music to cook by 🙂 oh and have a beer to!