Behemoth Hopportunity, the Double IPA. Double up, double time, doubling and doubles only.

Never let a hopportunity pass you by unless you are driving, then let this one pass you by, and maybe have one when you get home

From the fill station, this ia 1 litre bottle of beer that is of 8% ABV, around 240 calories a see size and the bottle is 6.31 standard drink units in NZ. I noticed that this is 80 IBU things, which is in range.

This beer is made to showcase the Centennial Hop (with a little Nelson Sauvin just for good measure).

Not overly hoppy or grassy on the nose on opening, more sweetness if anything.

Looks great on the pour,  lovely orange brown colour, with a lovely fluffy head that looks so inviting. The aroma doesn’t take off in the glass, it still leans to sweet.

First mouth-sip is an explosion that slips by in a thrice.  Which is where it gets interesting.

There is a lot more grassiness than the aroma would indicate, and the finish is dry but not arid, the dip in the middle though, that caught me out. 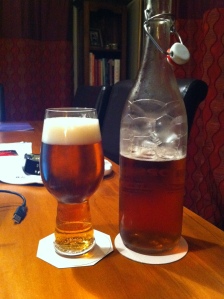 This then is lighter than you might expect, you can pick the carbonation bubbles if you want to, the grassiness is more mown grass, and not at all aggressive, there is a softer edge to it, which is a good thing.

The dryness is interesting, again it seems to be muted down in a clever way leaving you with a beer that satisfies the most of the taste profile and finishes with that immediate thought of “lets sip again”.

Of course it might be that it’s just an IPA and a style I appreciate. But I’m drinking this take on the style, so focus…..

There isn’t a lot to suggest that this is a 8% ABV beer, I mention that because it could be easy to forget and quaff like a thirsty man, get all squiffy and that’s an early night, thank you.

I could sum this up as, talk a big game, delivers a quite deceptively good beer, it’s not overly loud, aggressive or in-your-face, and despite there being, to my mind, a gap between the front and the finish this really is a well rounded beer that deserves a bit of attention.

I’ve also ended with that interesting sticky lips thing. If you get it you’ll get it.

Whilst I wanted this to be more, and I’m convinced in my head there is something skipped in the middle I’ve found myself smiling and foot-tapping away, and you can tell from wittering that I’m enjoying drinking, as this really is a live blog of sorts, I sip, I ponder, I write. I have a lot to say, except that it’s mostly the same thing. How good this is.

You know it all IPA beer could be this accessible, and take you on a bit of a journey then it’d be great, however sometimes you need to have someone doing it “a bit good’ to make you appreciate that the IPA and dIPA things are   very diverse and a there are many good ones, and sometimes, like this, a great one.  Get in!

The pdubyah-o-meter rates this as 10 a of its things from the thing. Because only because I started thinking that this was somehow short of a trick, or missing a trick, and found that it was me that was being tricked because the more you sip and ponder the more this really does touch a nerve, and light up the room.

It was kind of a Damien Jurado kind of evening, he’s  an American indie rock singer/songwriter from Seattle. You can listen to some of his stuff here on Spotify.

This is a track “Silver Timothy”