In a Squealer! Squeal of delight, squeal like a teenager, s=ql, and it’s a party squee!

(Disclaimer: although it’s an India Pale Ale, it was actually made here in Hamilton)

Brewed by Good George Brewing in the style of the India Pale Ale (IPA)  and they are in Hamilton, New Zealand. The ‘Tron- city of the future. 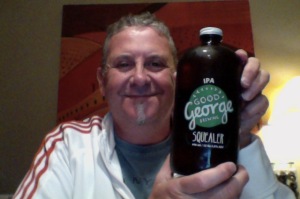 What then could possibly go wrong?

Light hiss, and a muted aroma of hops on opening the twisty lid. There is an unusual aroma in this, a strange fruit.

Pour is a lovely pale yellow, and a decent foamy head.

Aroma there is none.

It is lightly bitter, not big, not biting, just there.  Lightly grassy taste, but with something citrus lurking not really being in front. Lovely linger though lots of lip smacking going on. Not dry either at the back.

Fairly middle of the road then really. Truth is though we have an embarrassment of excellent IPAs in this country. A seriously goodly amount of riches. 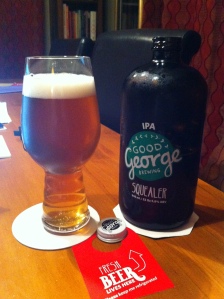 In and of itself there is nothing at all wrong with this beer, when however you think about the competition, and at the slightly higher ABV this would begin to struggle to hold it’s own on the taste and wallop, perhaps.

I do miss an aroma though, that harbinger of the tang on the tongue. I’d add one of those if I could.

At the half-way mark then.Still not setting any worlds alight with must have things that other beers should have, this is really just doing a number quietly and well on it’s own. I’d be happy to sit in a pub and have this a few times, add some food things, perhaps a while longer. A beer to get you to a happy place but not in a rush about it.

The pdubyah-o-meter rates this as 8 a of its things from the thing. 8 is ‘very good’ and this indeed is very good. I’d suggest that the timid beer drinker would find this a right treat of a thing to get them into an IPA. The seasoned IPA drinker might sniff, but on reflection would smile that they’ve enjoyed a beer that has not a of downside but a few things they might miss on the upside if they were after a hop front/heavy beer. Which I wasn’t.

I did sneer, then I took stock and I smiled. Good work George.

Musically it’s not teenage squealing though, I lied again, this time it’s The Charlatans (known in the United States as The Charlatans UK) are an English indie rock band. They’re a bit hit and miss but overall a good and  pleasant surprise. This is off the album “Modern Nature” and it’s “Let the good times be never ending” Listen here on Spotify, or all the other places probably.

India Pale Ale gets its name and unique style from British brewers who were making beer for export to India. This style has an intense hop flavor which was used to preserve the beer for the long voyage. India Pale Ale has a golden to copper color with a medium maltiness and body. The aroma is moderate to very strong. IPAs work especially well at cutting the heat of chili, vindaloo or Sichuan cuisine