I’ve seen a lot of Porter/Stout beers around of late. Today is some of the same. Fancy beer, fancy a song, fancy little number, and fancy seeing you here

brewed with eight malts and whole crayfish plunged into the kettle boil, for a subtle fusion of sea and land.

For Bach Brewing Ltd this is brewed at Steam Brewing Company, it’s in the style that is  Porter and they are in Auckland, New Zealand 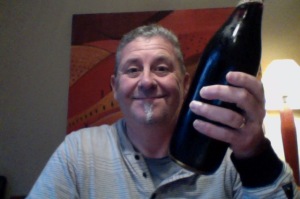 This version uses whole crayfish cooked in the brew kettle to provide a slight briney saltyness complemented by the dark roasted malt base.

We strongly urge you to open your mind to this beer, it could become a world renowned classic.

The immediate aroma was of a chocolate, and then something brief, salty, and then back to a strong chocolate, I imagine I imagined the saltiness. 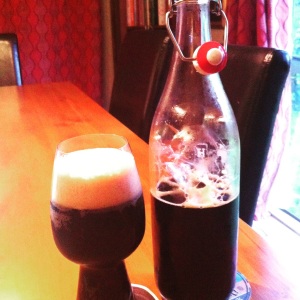 In the glass it seems to be more smokey. The head is a wonder to behold, milkshake thick on top a dark beer, it is as pretty as a picture.

lightly bitter, with what might be a salty under taste in the carry, not strong but something different to what.

Has a nice finish and a linger too, it’s quite the drinkable beer.

But.. it’s not quite ‘right’ somehow.  I’m drinking some more to see if I can get handle on it, someone has to do the hard yards. When I say ‘not right’ I mean ‘gosh this is unusual’, and it’s like somehow the brewer has stumbled onto something quirky and has struck a bullseye.

This really does have an ace aroma as you got to drink, it hints at things to come, but they don’t arrive in the way you expect. Now, I’ve drunk a few beers, but I have no a clue about what I’m tasting here, except that it seems nice and I’m enjoying it, and that’s an odd thing.

It’s also been a while since I had crayfish, lets be honest, its not an everyday food. I’m not sure that the taste experience I’m having is crayfish.  But there is for me a background taste that I’m picking as salty, and seafood is salty right. So there you are, that’s science that is.

Second half of the FYO bottle is as lively as the first. That thick wonderful milkshake head resolves into a film, the aroma still strong. Bitterness low, finish just there, just dry.

Then something happened…  it warmed, it got thicker, richer, fuller. This might though be my fear that I’ve now finished the second glass, lots more hop edge, earthier, tastier.

The pdubyah-o-meter rates this as 9 of its things from the thing. This is a bit of a slow burner, I thought it was a bit thin to start but it gets better and better, and whilst I think it has none of the tastes that you might thing Porter this does have some tastes that I enjoyed without actually being able to label them, at the end I enjoyed the full richness and the lovely mouthful that this had. The lesson herts patience.

…In the early days Jim Reid’s guitar would be left out of tune, while Dalglish’s drum kit was limited to two drums, and Hart’s bass guitar only had three strings, down to two by 1985; in Hart’s words “that’s the two I use, I mean what’s the fucking point spending money on another two? Two is enough.“