BeerJerkNZ beer club beer of the week is the Baylands Enforcer a Black IPA.

Brewed by Baylands Brewery of course as a Black IPA and they do that based out of Wellington, New Zealand

Black in colour, with citrus aroma and taste from the US hops.

Slight smokiness and a very pleasant lingering bitterness to finish.

Wet grass hop aroma on pulling the tab, the you get a roasted malt chocolate thing.

Pour is lovely, a dark beer, of course, with a lovely milkshake fluffy head of  off white.  Aroma in the grass is mostly of hop bitterness. I’m waiting for the the roasted malt thing to kick in. Stand by.

It’s not apparent but there is a slight sour citrus hop aroma.

This is nicer than I remember it from the first time around, I’m enjoying the fuller mouthfeel from the sweater roasted malts, and the lovely bitterness wash, although the finish needs to be sharper perhaps. 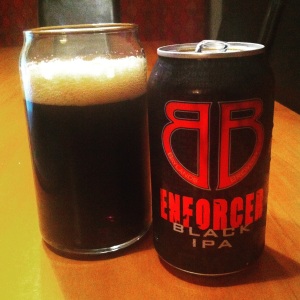 Recently I’ve had some beers that have a really full aromatic experience in the glass that you get just before you drink, this is one of those too.

I thought the underlying notes were of tropical

But I don’t really like the sour hop taste that this has, despite the efforts of the roasted malts to being some fullness the finish gets to that raw hop grass quickly and it’s pretty persistent.

I end up then on the wrong side of this beer, I quite like the aroma and the pour, it looks great, and the initial taste is nice, but then that row hop bitterness begins to assert itself and take over,

The pdubyah-o-meter rates this as 7 a of its things from the thing. I think I enjoyed it more than I did the first time, slightly, but I still don’t get what it is trying to do or trying to be,

I’m listening to the quirky  ” Sweet Baboo ” = ” The Boombox Ballads ”  on Spotify   Sweet Baboo is Stephen Black, a musician from rural North Wales. Before becoming a solo artist, he played with the band JT Mouse.