A bit of a rare find on keg a collaboration beer with the Pink Boots society NZ chapter,  the Mata Caribbean Queen.

“.Perfect for someone who likes beer that doesn’t taste like beer..”

Brewed by Aotearoa Breweries  in that style of a  Porter and they’re in Kawerau, New Zealand 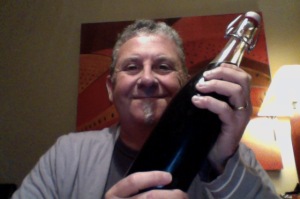 So what could possibly go wrong? Well I explained this to MrsPhil and she said “Lady beer?” one of the reasons we’re still married after so many years.

Aroma is vanilla sweet and then a waft of darker richer chocolate, a lot of vanilla.  Pour is lovely with initially a nice head that drops to a film.

Aroma in the glass still rich with vanilla but just on top of that milky chocolate thing.

Toasted coconut was a taste  I got. It is however very carbonated and you get that odd mouthfeel that carbonated beer has. Perhaps it was just the initial rush as second time in it seems a lot calmer.

The vanilla note is fairly strong on the taste, not over the top but.

A beer that rated very highly at the recent Beervana event in Wellington recently. Easy choice.

Personally I’d dial back the carbonation if I could and let the sweet vanilla and the chocolate carry this with the coconut giving it some body. I don’t really like the over bubble experience on the tongue, I  find it distracting.

The aroma however is really warming to the nose, but like all things the raw vanilla is a bit prickly after a short while.

But as it warms it just settle into being a really nice drinking, although somewhat sweet, Porter beer.

There is a gap here where I had some dinner things, home made falafel, a meat free me tonight.

The pour for the last glass is still lovely the head full and airy, slowly folding and dying. Aroma is syrupy sweet, the taste still a lot of vanilla but fuller, and now slightly drier on the finish. It’s been emotional.

The pdubyah-o-meter rates this as 8 of its things from the thing. It is really nice and all the things it says it is, it is. The vanilla though and the overall sweetness are both the strength and the help of this, and I like a sweet beer that brings you back, this seems to punch the tastebuds a bit, a small thing but the send 1/2 begins to stretch out and you perhaps being to look for a relief or the next thing to wake your palate.

Music for this, well ” The Fratellis ” who have an album ” Eyes Wide, Tongue Tied” which of course I have on the Spotify player  . The Fratellis are a rock band from Glasgow, Scotland. This might be an album to listen to a couple of times.