Standing Spoon, perhaps the newest craft brewer in NZ, bottles with hand written batch and expiry numbers on the bottles, that made me smile.

This Dashing Character is full of surprises.

Brewed by Standing Spoon Brewery this is in the style that is  Altbier and they’re in Auckland, New Zealand 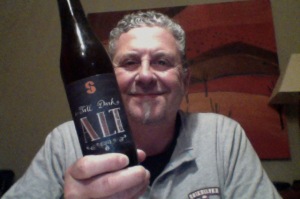 This Dashing Character is full of surprises. Old? Yes. Bitter? No.

Alt is smooth and mellow and yet full of personality – all the good things that come with age and, in this case, a 3000-year old brewing pedigree.

With a deep copper hue and dense creamy foam he’s pretty handsome too.

Rich aroma of the dark malt and yeast, quite distinctive.

Does not pour as dark as I was expecting, although in the glass it looks quite deep brown. No head, but then you know I’m not an expert, but I did manage to get it all in without spilling any

In the glass the aroma seem quite rich.

The odd thing is that this seems also to want to have the aroma of a fruit, cherry perhaps, beer.

For such an unusual style then it might be difficult to measure of judge against what you might expect and taste.

This is really even drinking, there are no edges or peaks that you should worry about, and whilst a nice mouthfeel this has no real finish of linger.

Just a nice drinking beer really, clean and crisp, I’d hazard to say that this is a cracker example of the little used style.

Wonder if they could be persuaded to make Sticke Alt.

The pdubyah-o-meter rates this as 9 of its things from the thing. Brilliant drinking, lovely softness, light carbonation, lovely to look at, decent aroma, lovely on the tongue, reminded me of summer, when I think this would be the ducks nuts.

Music for this : ” Mazzy Star”  and ” Seasons of your day ” of course on Spotify Mazzy Star is an American alternative rock band formed in Santa Monica, California, in 1989 from the group Opal, a collaboration of guitarist David Roback and ‎Hope Sandoval

Well hopped and malty with copper to dark-brown color, native to Dusseldorf, Germany. Alt is the German word for “old” or “old style”. It is more or less the German equivalent to an English ale. Traditionally fermented warm but aged at cold temperatures.