or more properly Boundary Road Brewer’s Cut 18th Amendment. Not strictly a ‘draft beer’ in the sense that this is a ‘big brewer’ making beer in a different guise.

brewed in honour of your friendly, local bootlegger

Brewed by Independent Breweries NZ (Boundary Road) in the style that is  American Pale Ale and they do that in Papakura, Auckland, New Zealand 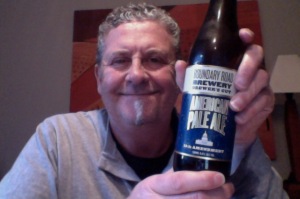 A man about to have a commercial beer….

The 18th Amendment brought about the darkest period of American history. (No, not The Brady Bunch Movie, Prohibition.)

The ban on alcohol meant you couldn’t get a decent beer anywhere, unless, of course, you “knew a guy”.

This A.P.A., brewed in honour of your friendly, local bootlegger, is loaded with all-American hops, notes of citrus, and a crisp, bitter finish. Enjoy it quick before someone makes fun illegal again.

Aroma on opening is a rather dull thud of hops and not much else.

Pour is a lovely caramel brown color and it has a stark white head that is just the right size, and persistence.  Not picking any particular aroma in the glass. 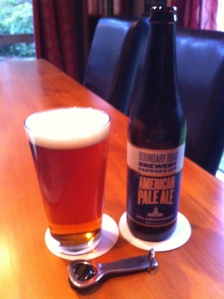 Surprisingly then the caramel is extremely nice and full, the mouthfeel is decent, the finish fades somewhat to a itchy dryness.

There is a lot of carbonation in this giving it that slightly uncomfortable mouthfeel.

I am enjoying this though, it is easy drinking, the hop notes are low, the caramel level high, the finish just a dab at the back, leaves a lovely lacing in the glass too.

If anything I would have though this more an English Bitter it has a lot of things that remind me of that style and the low hop presence does not remind me of a Pale Ale.

The pdubyah-o-meter rates this as 7 of its things from the thing. You could do a lot worse that drinking this, and honestly if you were stretching beyond the quantity commercial and wanting a dabble in a craft beer this is a good stepping stone, oh a gateway beer 🙂

Music for this, as you know like beer I’ll try anything once, this time it is time for ” Iron Maiden ” and ” Book of Souls ” on Spotify Iron Maiden are an English heavy metal band formed in Leyton, east London, in 1975 by bassist and primary songwriter Steve Harris.