Perhaps one of the strangest beers with the most appeal, talking of appeal here is something appealing, or appalling

From the growler station then I have a  beer that is 7.7% ABV, 231 calories a serve size, which drops in a t 6.8 standard drink units in NZ

Brewed by Three Boys Brewery in the style that is mostly India Pale Ale (IPA) and they’re in Christchurch, New Zealand. 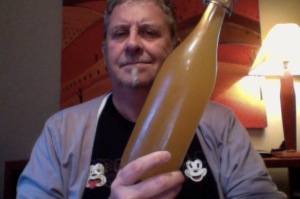 A Big and Bold White IPA.

So, what could possibly go wrong? The last time I had one in this style I was not a fan. But time has passed I’m a bigger man.

Aroma is really hoppy, but underneath is a slight spice note. no one said it would be easy.

It pours like it looks, cloudy yellow, But with a brilliant white fluffy head. Aroma is still that mostly grass note, but it’s not a sharp note, rather soft.

It’s very dry to the taste, which I wasn’t expecting and there isn’t really a strong hop grass note, it’s more just a bitterness, although there is quite a pronounced hop burp which is very grassy, and a bit uncouth.

MrsPhil came over to check it out, confused on the look, and then when I started to explain, well lets just say that didn’t end well.

But as a beer this is so easy to enjoy, and whilst it does have some of the mouth feel and taste of an IPA, even if it’s a lighter hop version, and what I find as visually appealing cloudy wheat looking.

It really is a bit odd. The cruel part of me says it looks like home-brew but it doesn’t taste like home-brew that I’ve ever drunk it’s much better than that.

What is lacks though might be a strong citrus note, or something that is more a hat tip to Wit style beer in the flavour somewhere, but I have no idea how to shore horn that in there.

It’s getting warmer as I sit here taking about it and having a text conversation and what I’ve noticed is that this seem to be getting drier in the finish. Which in itself isn’t such a bad thing, it plays to that IPA thing, but on the whole and overall this is very interesting to drink. Remember that citrus note? I’m sure it’s in here just lurking and being around, the more I have the more I find.

I love these contrary styles, they challenge your thinking, you make up a lot of stuff with a visual appearance and this side-steps that and delivers something else, the there is the description, again I thought it was quite a broad  description.

What I didn’t mention is that there is no way you can tell what the alcohol content of this is, and at 7.7 it catches you out quite quickly, there are you quaffing like a man in the desert and then you get that warm happy place feeling, and then you realise that you’ve gone to early… well played Three Boys, well played.

The pdubyah-o-meter rates this as 8 of its things from the thing.

I love the way that the beer looks like A and tastes like B. I’ve enjoyed the days drinking low hop bitterness. I really like the visual of this, the way it pours and sits in the glass, the brilliant white head. I love the dryness, it’s there but it isn’t the all of the beer. I’ve enjoyed the refreshing nature that this brought.

So there you go, to sum up:  I enjoyed it despite it looking a bit like home-brew.

Music for this  ” Metric ”  ” Pagans in Vegas ” which I found on Spotify Metric are a Canadian rock band founded in 1998 in Toronto.