To the front of the fridge with this one after what seems like forever at the back. I like Barley Wine beers, I hope this one gets up. Favourite beers, Favourite musics, Favourite numbers and favourite friends.

“.. a beer this big will only get better with age.”

Brewed by Garage Project in the style that is  Barley Wine and they do that in Wellington, New Zealand It is however no longer available from the brewer so getting rare with each one drunk of course. 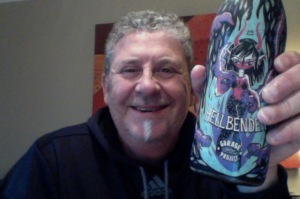 I found this in the fridge.

You are about to be tested.

This bottle contains Hellbender, a leviathan of a beer made with over a tonne of malt and a mountain of American hops.

Brewed in late 2014. Conditioned in bottle until July 2015. You know it would taste great right now, but a beer this big will only get better with age.

So, what could possibly go wrong? Well my memory of buying this seems more than two months ago, but hey a lot of things happen all the time so it is possible.

That smells of deep steeped fruits, dusty sugary caramel. It’s a real nose-ht that made me cough in surprise, in a good way.

Ruddy brown, almost ruby dark pour with a lovely off white head that just looks amazing. Aroma in the glass has added a grapefruit of a strong citrus note, but it still has lashing of that raisins thing going on. 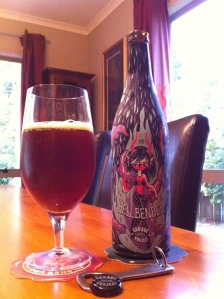 Wow that is both at the same time rich and sugary and also bitter, it really is very very intense tasting, full impact stuff. Like that was a surprise. Well it was a bit, but a nice surprise, reminds you that this is sipping not supping beer.

This much intensity in a beer makes you kind of stop and regret not having a food to temper it out, but then that would be a distraction.

The thing with the all-action beers though is that they tend to hammer you into a bit of a place, not a submission but a resignation that each sip is a bit of belt. Also, perhaps more importantly, not a beer to start a night out on,  Lucky the ‘Rugby World Cup’  is on a lot later.

This though is lovely sitting and contemplating beer, the taste is very consistent, as is the level of bitterness, the hit of the super sweet caramel and sugars and the alcohol remains behaved and not so noticeable, given away on;y by the grin you’re now wearing.

Thick syrupy, sugary,sipping, intense beer. Need I say more? Well of course, mad not too, you know what beer and language are like.

Perhaps one of the nicest quiet and contemplate beers that I’ve had in a long time, really enjoyed it, and in no hurry to finish, although it is pretty much done.

The pdubyah-o-meter rates this as 10 of its things from the thing. The devil made me do it, this is a beer that is nor produced anymore, but that’s not the reason it is this good, because frankly it really is this good. A beer that I’d buy again in heartbeat and drink in another year, because by then the memory of it would be that it’s brilliant and the beer by then would be, well, brilliant.

Music for this : ” Lana Del Rey ”  ” Honeymoon” on Spotify  is what popped up, I wasn’t sure what to expect but this seems rather mellow and measured. Elizabeth Woolridge Grant, known by her stage name Lana Del Rey and former stage name “Lizzy Grant”, is an American singer, songwriter and model