‘ .. perfect for our long summer evenings. “

From the ever trusty fill-station this is the one litre bottle of beer that is 4.9% ABV, and only 136 calories a serve size, so that makes it around 3.9 standard drink units in the bottle.

Brewed by Zeelandt Brewery in the style: Saison and they do that in Napier, New Zealand

Originally brewed during the quieter winter months in Wallonia, the French speaking area of Belgium, for consumption by the workers during the warmer months. Though in those

Summer T-shirt on and everything

days it would likely have been around 3-3.5% helping the farm workers function while drinking it, this one from Eskdale in the Hawkes Bay is a shade under 5% (which is lower than the norm of around 7%).

The resulting beer is dry with good acidity and a complex aroma characteristic of this style; perfect for our long summer evenings.

Almost winey on the nose with vibrant stone fruit and magnolia floral notes, the palate enters with a zingy sour burst, becoming creamy and biscuity through the finish. Chardonnay drinkers will likely find much to enjoy in this beer.

The aroma on this is light, and slightly sour, and there is a decent hiss on the pop. Can’t wait to pour it.

The aroma in the glass is the same, that familiar slightly sour thing, lovely pour with a nice white head that settles but is more than a film.

Whilst not the fullest of mouthfuls this does seems to have a fair amount of a sweet body that carries it, and the finish is sharp but not pin-prick sharp. 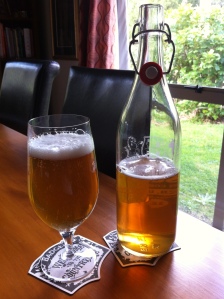 If anything this is under-carbonated and then that makes it seem a bit flat on the palate, and that in turn makes it seem just a bit ‘thin’ or lacking in body.

With that combination you end up with a a drink that is light flavoured quaffing water, slightly fizzy but not so much, and lacking in any real flavour, aroma or taste points that would make you think it’s one thing or another, or to put it another way, slightly disappointing.

I hate being disappointed by a beer, but lets be honest, this does not tick the aroma, head, esters, spices or complexity that you might be thinking that you’d get in a Saison beer. I’ve seen people think this is a Witbier or similar, it isn’t even close to being that.

Then again, if it was warm, and I was outside in the sun, and this came out I’d be smiling as there is no effort at all in drinking this, which either fits the brief or totally misses the point. Personally I enjoy interacting with beer and discovering the layers and complexity over something that to be frank is just a bit ‘meh’.

The pdubyah-o-meter rates this as 6 of its things from the thing. I went out of my way to buy this, deliberately and willingly, knowing the style and where it might be short, and where it might be lacking, this though didn’t even get to some of those markers. Six is above average, and a number I don’t use that much, but this isn’t that.

Music for this : “Kitty Daisy and Lewis ”  ” Kitty, Daisy & Lewis the third” on the Spotify of course. Kitty, Daisy & Lewis are a British five-piece band fronted by the siblings of the Durham family. Their music is influenced heavily by R&B, swing, jump blues, country and Western, blues, Hawaiian and rock ‘n’ roll.