Into a new year and it’s back to an old beer. Sometimes it’s like that, this was the best of the on tap beers for my mood, and I enjoyed it last time I had it over a year ago, when it was in bottles.

“At 70 IBU, your mouth will be left comfortably numb”

Brewed by Moa Brewing Company, in that style that is India Pale Ale (IPA) an they’re in Blenheim, New Zealand. 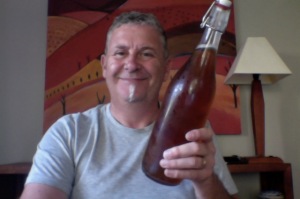 Festive me a beer

At 70 IBU, your mouth will be left comfortably numb, making it the perfect beer for the festive season.

What could possibly go wrong? It’s been a really warm days and I’m cooking on the BBQ later, and I hope that this is the beer that makes the whole complete.

It is very lively in the bottle, the lid flying back like a trebuchet allowing a really pungent aroma of grassy piney resinous hops out.

It is a surprisingly bright orange and the head is tinged orange too, very firm and full it is too.

Aroma is citrus, lemons, limes, sweetness, and a slight earthiness.  This is less peppery and less aggressive than the bottle version was (it was a year ago) so some of that might

just be change in palate or how I’m drinking, but this seems to be a much more rounded and accessible beer than I recall. I think possibly for the better.

One of the most noticeable things is that the dry finish has been removed, mostly, but there is a lovely resinous linger in this, which is pleasant and pleasing.

What I do notice though is that this is a beer with some distinct and noticeable character, and the various hop profiles are noticeable, each slightly different timing in the mouth, quite entertaining.

So there I was expecting quite and earthy raw beer and I find that I have quite a sweet mellow rounded beer with a couple of endless and peaks but generally a bit good and enjoyable. Not outstanding in any particular bit, but it does come together.

The pdubyah-o-meter rates this as an 8 a of its things from the thing. I think I made this this the same last time, 8 is ‘very good’ on the arbitrary scale. This is very good, no mistaking a craftsman at work really.

Musical taste wavered towards  something old and so  ‘ The Cure ‘ and the magnificent ‘  Seventeen Seconds ‘ on Spotify. I remember buying this on vinyl the first time it was released, it was that or cassette, it was 1980.  The Cure are an English rock band formed in Crawley, West Sussex, in 1976.