ParrotDog Pandemonium, a beer with a name to fill you with dread. Or not. Tonight is Ribs night, and so bearing that in mind I went for something that I thought might entertain me beforehand and quench me afterwards. Only time will tell there.

A murder of crows, a parliament of owls, and a pandemonium of parrots.

This is beer that is at 4.8% ABV and 144 calories a serve size, that makes this 1 litre growler about 3.79 standard drink units.

Brewed by ParrotDog in the style that is of a Pilsener and they do that in Wellington, New Zealand 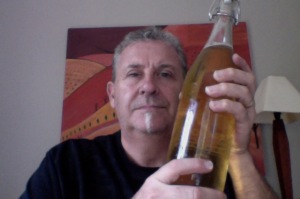 The calm before the pandemonium

Our first ever lager took flight among the ’new world’ pilseners which put lively modern hop varieties onto the crisp, light and refreshing body of the classics.

That;s a lot of bubbles built up the lid fair flew off. Aroma is a musty straw thing, not that comfortable.

Naturally I made a hash of the pour, with a 75/25 beer to head ration forming, I really need more practice. The head shows little inclination to fade away.  In the glass the aroma is much better with some familiar aromas and underlying sweetness appearing, but it’s more resinous grass now which is a bit of a relief. 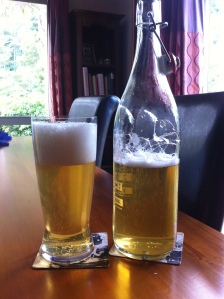 Oh there was an initial catch of something at the front that surprised, a real peak of something spicy or sharp, did not expect that, but then again it is a Pilsener and I should have been paying attention. Then it just washes over and takes a full-time doing it with that lovely slightly harsh edge bitterness on a softness to the finish with isn’t long but drifts away. That’s almost poetry is that.

I’m even beginning to enjoy the nose aroma, and then the wash over of the hop notes and just do enough and no more. This is pretty easy drinking really, perhaps that is the benchmark for a beer of this style.

Seems though that I’ve not though anything bad about this, then again I don’t think I’ve really been over enthusiastic about it being overly good. If it was an exam you’d possibly go a C or B- perhaps, I don’t know I’m not a teacher.

The benchmark might be though “would I truly have two in the pub” which is one of those double-dip questions, and I think for this I probably would, because it is heaps better than other pilsner types that might be available, it is softer, less brash and easier to enjoy the unfolding taste and aroma, which does set it apart. However I’ m not sure how it stands up against a Panhead or a Behemoth or a Good George or a Lakeman I’m pretty sure it’d be a stiff competition, and not being a Pilsener buff or expert I’d enjoy it if someone could please organise a taste off for me please. (Could happen).

I quite like the softer hop bite that this has, some might think it’s not enough, and I think that’s where the game is really.

At this point I realised I’d drunk a goodly half, and was about to quaff away at the last half, which reminds me of the appeal of the light body lager beers bring to the table, quaffing. This though is a beer that is mor substance over quantity and I’ve stopped to pause, because once it’s gone, it is gone.

The pdubyah-o-meter rates this as 8 of its things from the thing. It is a lovely drinking beer but it kind of lacks anything that brightens or sparks up the palate in drinking, which is a plus and a minus. You end up with a beer that is easy unthinking drinking, perhaps the brewers nirvana.

Music for this:  ” Wintersleep ” and ” The Great Detachment ”  on Spotify

Wintersleep is a Canadian indie rock band formed in 2001 in Halifax, Nova Scotia. This is “Amerika”