It’s their beer #29 –  and Snakebite sent a shiver down my spine with vague memories of long nights and late mornings.

Brewed by Gigantic Brewing Co. in the style best described as Fruit Beer and they do that in Portland, Oregon  USA 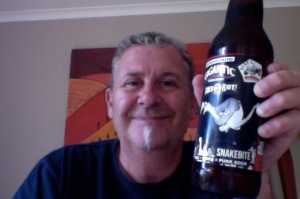 a man remembers Snakebite from many years ago

A collaboration with our cider making friends at Cider Riot! and our brewer friends at Beau’s All Natural Brewing.

Snakebite really is 2/3 Kölsch and 1/3 cider fermented together with a touch of black currant.

The result is light and effervescent, with a cidery fruit character, light hoppiness and a tart, fruity finish.

So, what could possibly go wrong?  An almost mystical concoction the Snakebite was refused in many establishment as measurement of the ingredients wasn’t exact, and the British are very strict about beer measurement. Still that never stopped us on many occasions.

Aroma is neither a one thing or another, the Kolsch aroma is the one I’d pick, as if I thought there would be two aromas.

Tinged with blackcurrant this is an interesting colour n the glass, and without much of a head to speak of really.  Aroma still that faint damp grass thing that I associate with lager types. Earthy. 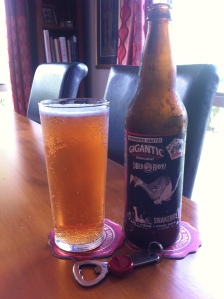 And all that trepidation and frankly the taste was a bit of a let down, I’ve built this up in my mind to be something it isn’t and something I don’t remember. It is like a thin sour saison type beer. Honest I was disappointed.

It is way to placid to be “punk rock” it’s like a pensioner version remembers, and then really didn’t remember, this is a travesty really, and that’s the harshest I can be about a memory they promised.

The beer, all that aside, is soft, mellow, slightly sour, but lacks body and middle, with a finish that is trying to be dry but can’t quite muster, The Kölsch way to soft to carry it off really.

I’ll put the punk rock albums away for another day.

The pdubyah-o-meter rates this as 5 of its things from the thing. I WANTED MORE. I wanted more lager bite, I wanted more Apple cider aroma. I wanted it to be slightly more red from the blackcurrant and it was not any of those things

Music for this:  ” Blondie ” and the very good “Parallel Lines“ on Spotify

I really like “Fade Away and Radiate” if you ask