Arrived very late in the year  the Yeastie Boys His Majesty – the 2016 version. Sine then I’ve done all sorts of things, and even planned to have this the next beer after Her Majesty, but such is the way of things that I’ve just got around to this.

Brewed by Yeastie Boys in the style: Golden Ale/Blond Ale and they are in Wellington, New Zealand 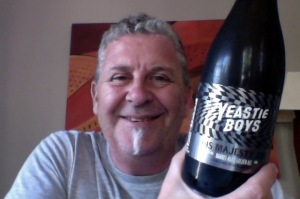 The first of two results from a Yeastie Boys’ shareholder blending session in September 2016.

A freshly conditioned, hoppy golden ale has been brewed to blend with a two year old wine barrel-aged Cherry Ghost.

Something old, something new.

Oddly a sour aroma on opening, vinegary almost- I panic.

I pour, and panic over as it slashes bright golden yellow with a brilliant arctic white head of substance and form. The aroma in rich in malts and also a bready yeast note that I don’t remember from when I had this from the keg.

Taste is burst of many things, with notes like cut grass, citrus orange. 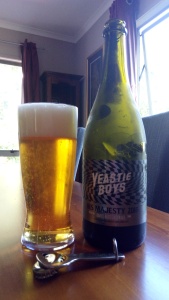 Bitterness is hard and abrupt and the dryness is more at the middle front of the tongue rather than at the back.

I really like the sugary sweetness that this has, It pleases me greatly, which is most of the point in having a beer I guess..

Also really like that lovely lemon like fruit tropical that this has, which is in keeping with the look and balance.

The aroma in the glass doesn’t shake that bready note as it warms, I’m marking that down as a feature.

Then I remind myself that this isn’t a common or overly popular style of beer, and if this is how they taste then I’m surprised that they’re not more common. This is a beer that is totally worthy of the “his Majesty” badge and honour.

The pdubyah-o-meter rates this as 8 of its things from the thing. Another year and another good beer from the YB people. I’m pretty happy to have has at least the last 4 years versions. Something I really forward to at the late part of the year.

Music for this:  ” Elbow ” with ” Little Fictions on Spotify

There are a few different types of blond ale. The first is the traditional “Canadian Ale”, an adjunct-laden, macrobrewed, top-fermented equivalent of the American Standard. The second is common in US brewpubs – a light starter ale, with marginally more hop and body than a macrobrew, fewer adjuncts, but still not a flavourful beer by any means. The British interpretation is easily the boldest, hoppiest blond ale rendition. Some of these can almost be considered American Pales they are so hopped up – very crisp, refreshing, with relatively low alcohol compared with their North American