Omnipollo Bianca Mango Lassi Gose  – which could easily be a lyric to a song, but it isn’t, its this weeks Beer Jerk NZ beer club beer. A sour beer. You’d know I don’t like sour beers, however this one isn’t a clumsy attempt at one I hope. Also a new brewer, beer from a new country and a new cap for the bottle jar!

For Omnipollo this is brewed at Buxton in the style that is possibly best as  Grodziskie/Gose/Lichtenhainer  and they’re from Stockholm, Sweden, the brewer not so much. 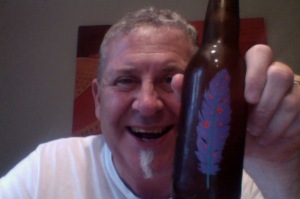 Bianca is a Gose brewed with rock salt, lactose and mango puree as a beer-y homage to everyone’s favourite Indian yoghurt drink.

This one was brewed at Buxton Brewery in Derbyshire.

If you’ve ever drank a gose or a mango lassi, you could guess what this tastes like. It has a fresh juicy mango, lemon character countered by delicate lactose sourness.

It is light and effervescent with a touch of sweetness and a little tart. It is refreshing, rather more-ish and, in common with most of their beers, quite unlike anything else.

So, What could possibly go wrong? New Beer Opener Tonight too, officially a BeerJerk.

That smells very hoppy like pilsner hops on opening, the the aroma is of, honest, mango. That is one of best beers I’ve smelt on opening for a long time, and I’ve not even poured it yet.

Pour is a hazy dull yellow with a small fizz of a head. The aroma is mostly that strong mango, which is quite pleasant and pleasing. 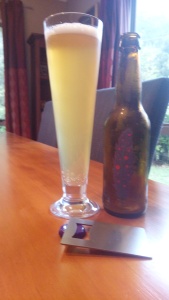 Bitter sourness washes over everything. Eye squinting sour. The kind of sour that I really don’t like in a beer, at the level.

uncommonly though I think this has a rather full mouthfeel, that is, a bit of middle.  Not big or impressive, but that’s what I think.

Also this is quite refreshing, and that sourness, although for me a tad high, is something that you actually get to enjoy as it peps up and gives the taste buds a bit of a hurry up, you end up with a bit of a smile and an appreciation. Not love, or an epiphany, I still don’t like sour beers.

Once again the nice thing about the beer club is that you get to try something that you might not see on the shelf, from a place you’ve never heard of, or will visit. and that’s always a good thing.

The pdubyah-o-meter rates this as 7 of its things from the thing. I don’t like sour beer at this level. I liked the aroma, and I really can appreciate that this is nicely brewed, and unusual. I enjoyed the mango aftertaste and I though an unusually full mouthfeel. But I’m not a convert.

Amber Run is a British band from Nottingham, UK

Sour wheat beers were common in many parts of medieval and early Industrial Europe. Two styles – lambic and Berliner weisse – survived, but many others did not. Gose and Lichtenhainer are historic styles of sour wheat beer. Grodzisk is sometimes tart, sometimes not. Gose is seasoned with salt, Grodziskie and Lichtenhainer contain smoked malt. Historical sources are mixed about Lichtenhainer containing wheat, so modern interpretations may vary. Grätzer is an alternative name for Grodziskie. All three will be relatively low alcohol, with a strong wheat character, but will be distinct from classic examples of Berliner Weisse or lambic. As all we have are historical recreations, substantial differences may exist between interpretations.