The Catlins, they’re deep way down south of the south island, and they have a beer or two that have made it up to the big smoke. I chose the Scotch Mist, mostly because it’s manuka smoked.

Brewed by Catlins Brewery in the style that best is perhaps as a Smoked and the are in the superbly picturesque Kaka Point, New Zealand 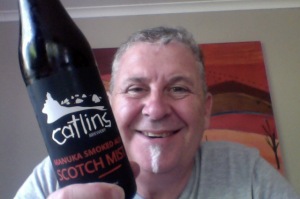 Highland single malt whiskeys are famous for their peat smokiness and this beer captures that quality using a unique Manuka smoked malt.

It is inspired by those early Scottish settlers who headed to the Catlins region and set up home.

The early years would have seen many a moonshiner and brewer working with malts that they smoked with native timbers.

This beer is beautifully balanced  and best enjoyed with Haggis, Neeps and Tatties in front of an open fire

A HINT OF HONEY FLAVOUR AND A SMACK OF SMOKINESS MAKES THIS A SCOTTISH ALE TO REMEMBER. BEST ENJOYED JUST SLIGHTLY CHILLED AND ACCOMPANIED WITH SPICY FOOD.

Sour aroma from this, not really what I expected, but it’s not pleasant.

In the glass the aroma moves to a duller flatter note that isn’t easy to identify. 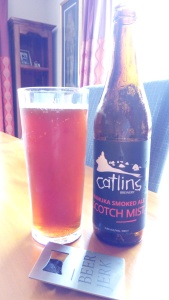 Brilliant! Just Brilliant. Lovely sugary fullness with a fine mount of bitterness in this, I had to show restraint and remember to sip not sup. Easily I could sup.

Not a lot of smoked about this though which is disappointing, if anything it wavers towards a fruity citrus thing rather than a smoked peaty thing.

If only they could add that then this would easily sit in amongst the top beers of the year so far.

I’m also a bit of the fan the way that this is just slight sour rather than bitter, the proper kind of sour, not the eye squinting kind.

The pdubyah-o-meter rates this as 8 of its things from the thing. I finished the glass in silence and contemplation with a bit of a smile, and that regret that you didn’t get a second, then on reflection perhaps not. This was a nice beer don’t get me wrong, it just isn’t what the label says it is.  I’m going to get another from this brewer, its the decent thing to do, and if it’s as good as this then that’ll be a bonus.

Music for this:  ” Molly Burch” with ” Please be Mine ” on Spotify