A beer called Susan, sensibility has been restored in the beer naming stakes. And because Australian Hops I’m paring that with Icelandic Music, of course.

enjoys shrimp on the barbie and a good old digery doo

ParrotDog Hazy IPA Keith is Brewed by ParrotDog this on in the style that is an  IPA – Hazy / New England and they do that in Wellington. 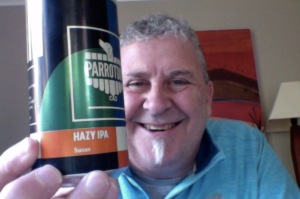 Susan is a sassy wee brew, she enjoys shrimp on the barbie and a good old didgeridoo, but we won’t that against her.

Juicy, with all Australian hops – something from Aussie has never tasted so good, we wouldn’t be surprised if they tried to claim this as their own!

I have high hopes, the music is amazing, the camembert made an appearance, it’s all coming up Millhouse.

Aroma is a dull hop thing, I know what that is but I can’t place it, an earthy thing. 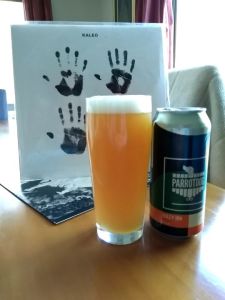 Pour is similar to Keith, but I found this to have  initially a much letterhead. It is also muddier and darker orange than the Keith version.

It is different and not better in many ways to the Keith version, on most points so far, aroma, looks, and initial taste.

The taste, well that’s earthy with a low bitterness and not a lot to balance that up by way of sweetness or softness and this is quite harsh to drink.

It isn’t hard drinking, and it is going down rather well, it’s just a beer that takes your attention to that, not dryness, but earthiness note that is sitting there.

I’ve clearly had these in the wrong order, and Susan should have been the run in to Keith, but I’m sure there are fans equally of both, because taste is different between all of us.

The pdubyah-o-meter rates this as 7 of its things from the thing. It is slightly off-track beer that has notes that I’m not happy with, that earthiness mostly, but this doesn’t have any pickup sweetness of juiciness about it that would bounce it back.

Kaleo is an Icelandic blues/rock band that formed at Mosfellsbær in 2012. It consists of lead vocalist and guitarist JJ Julius Son, drummer David Antonsson, bassist Daniel Kristjansson, and lead guitarist Rubin Pollock. They have released two studio albums, Kaleo and A/B. It is worth a listen.