0h well lookey here, I last had this beer in 2013 turns out I didn’t like it (a 6 on the pdubyah-o-meter), which means either I was a complete n00b or I was a genius. I don’t think I’m a genius now.  Still that was nearly a thousand beers ago.

Hallertau Porter Noir is a Special or Seasonal beer that is in a 500ml bottle, a beer of  6.6% ABV, so around 2.8 standard drinks and 200 calories a serve size.

Hallertau Brewbar & Restaurant  made this in the style that is a  Sour/Wild – Dark ale. and they are based in  🇳🇿 Riverhead, New Zealand

The Porter Noir is a beer from way out of left field. 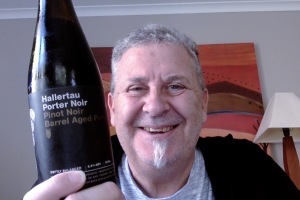 The barrels were only gently hot water rinsed before use to retain the wine charter and also the native yeasts in the wood. The four month maturation in the barrel develops the palette with gentile woody tannins and fruits of the forest from the previous resident. Combined with the remnants of chocolate and soft acidity from the native yeasts creates amazing mouth feel with a long drying finish.

The secondary fermentation in the bottle was carried out with the native yeasts from the barrel, namely brettanomyces. This is the same yeast used to bottle condition the famous Belgian Trappist beer Orval. The brettanomyces character dominates the aroma.

Layers of complexity, red currents, earthy gumboots, a stroll through the barnyard?? All very interesting stuff

Opening what is unmistakably a sour beer, sharp needle pints of sourness over an aroma that I think can be best describes as oaky/wooden.

It’s a very lively pour, offering up a 40/60 with the head winning out a billowy fluffy cloudy head that looks like it could be in for the long haul. 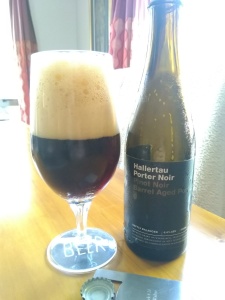 It carries that sour aroma well, and it’s even more pointed in the open, as it were.

I instantly get that wooden note, its a dullness, a thud where there shouldn’t be one.  The taste I can only describe a confused and muddied. It’s not sour enough to be a good sour beer, it’s not sweet enough to get away with fluffing it as lambic. and there’s not enough, what I could have hoped for tannin heaviness to bring it together.

What I don’t get is anything like a porter, you know those slightly deeper chocolate or toasted notes, and added to that there’s this really flat and distracting under note with this too.

For me it’s just odd.

I let it warm some more, and I really though that that cherry/pinot note was going to push through. It tried.

I’d like to think I do these re-reviews where I might have been wrong, and unfair, unkind or just not experienced enough to judge.  In this case it turns out I was a genius, and this beer, for me, like this, is just rather a lot of fuss over nothing.

The pdubyah-o-meter rates this as 6 of its things from the thing. It’s the same as it ever was, it might even be a little worse, there’s not a lot to commend this, it starts as an overexcited bottle fermented beer with great enthusiasm, but it’s really just a bit of a circus where all the acts want a go, and nothing really comes together.

Music for this:  ”Doppelgänger by Curve  on the Spotify player .

Doppelgänger is the debut studio album by British alternative rock band Curve. It was released on 9 March 1992