Supreme Harmony #001 – RESOLUTE – It’s a BarleyWine. ! I have no idea if this in the American on English style, but it is a Barleywine and I really think they are the pinnacle of beers.

Therefore I’m none the wiser at this point

Harmony is made by New New New in  🇳🇿 Dunedin, New Zealand as a  BarleyWine / WheatWine / RyeWine 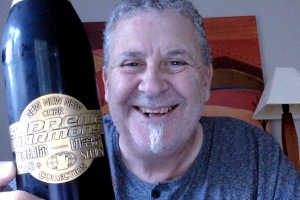 Aged in freshly decanted 30 year old Wilson’s (NZ Whisky Company) barrels for 18 months and conditioned for a further six months, this smooth barley wine holds a spectrum of complex whisky flavours, with sweet and fruity notes of raisin and grape.

I got my especially wonky hand blown glass out, it makes me giddy just looking at it empty.

Aroma is alcohol from the whisky, it somewhat catches in the back of the throat, I coughed a little.

Pour is a dark brown, looks carbonated but does not end with a head despite my effort, which wasn’t much really. It sits in the glass now looking like a cola drink.

The aroma still catches in the back of the throat, it’s quite astringent.

OK then, mostly whisky on the taste, but there is enough of a soft sweeter blanket underneath to keep it somewhat in check. Not quite enough as this can’t help but being at the boozy whisky end of the taste.

There’s even a lingering note of whisky at the back.

At this point I don’t know what style this is in, English or American. They’re as different as Mustards are. I’m going to be brave enough to suggest that this isn’t hop forward underneath that whisky ageing though. I could be wrong, it’s kind of murky getting that deep into this as a beer.

It’s stuck where it is then, I’m pretty sure this would be a ripping good beer if it had more malt body in the middle that could carry this, I think I’d probably explode with joy.

At the end though, after all the prevarication and pondering warming did not bring anything new forth and so I’m sad at that, but happy that I’ve had a Barleywine nevertheless, still, in my opinion, the best of the beers.

The pdubyah-o-meter rates this as 8 of its things from the thing. I don’t know if I like it or not, on the whole probably not,  there’s not a lot of nuance in this, other than Whisky as a flag bearer, with anything else second fiddle with the mute button pressed. Sadly does not improve with warming.

Music for this:  Chasing Yesterday (Deluxe Edition) by Noel Gallagher’s High Flying Birds which I have on Vinyl, it’s good on the internet though .