A few beers ago I tried the Yeastie Boys – Motueka Raven. This time I’m up for the Yakima Raven. 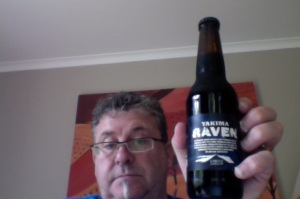 This one similarly brewed by the Yeastie Boys in their Invercargill Brewery in the style of a Black IPA.  Yeastie Boys are from Wellington, New Zealand, and Liberty Brewing, they’re all over the internet.

“It’s a knee-trembling honour to face him in our annual Yakima/Motueka hop challenge. Try this US hopped Black IPA alongside our NZ version and experience the difference 11,500km makes.”

And the thing is that it was a few beers since I had the Motueka Raven. So the challenge is with me.

There’s a goodly fantastic beer bitterness smell as you open the tiny 330ml bottle of  6.5% ABV beer, Pours dark, with an off white head. The initial Hop aroma though fades quite quickly, as does the head, it’s as if it all wanted to burst out at the one time. So we settle in for a low aroma beer.

The initial  taste isn’t a disappointment either, lots of the bittery hop taste and a decent linger.  Underneath the hops you can taste the malts trying to do their thing, and they carry it off with some credit. This is a high burp beer.

All the time I’m thinking that I’m  not a fan, that I’m trying to like this in a really hard way, but there is the crash of the bitterness that is the thing. That’s all the thing there is though. As it sits I do get a caramel on the aroma, that’s somewhat pleasing. I liked this more as it warmed in the glass, but then it just finished and I had no more.

To the chase though, I’m not sure If I’m over thinking it, or that the bitterness is that’s all Im going to get. I might not just get  the “Black IPA” thing, I might not get the IPA thing. Of the two beers though I think the first just shades it on it’s overall balance. If it was a choice. I wish I’d had the foresight to try these side to side, back to back and then I’d be more sure of a winner.

I do think it’s a terribly good idea to have a “similar but different” beer competition, even if it is amongst yourself.

The pudubyah-o-meter thinks that because this is just a shade bitter- all the time – that this is 6 from 10 arbitrary things from an equally arbitrary number. I’m worried that in my effort to like everything I’m being too kind.

The nice people at Liquorland stock these, and a goodly lot more beers besides, and as a bonus I found a gift card so this is a freebie!