Brewed by the  Hot Water Brewing Styled as an IPA,  and that all happening under our noses  really quite local to us here at Rings Beach, in the big scheme of things, at Whenuakite, Whitianga, New Zealand.

A generously hopped, aromatic N.Z Pale Ale using New Zealand grown Cascade,
Nelson Sauvin and Riwaka hops.
Balanced with enough malt character from the English pale and caramalt to carry the fruity Kiwi hop hit.
Aroma of tropical fruit carries through to the flavour which is backed up by a quenching bitterness. 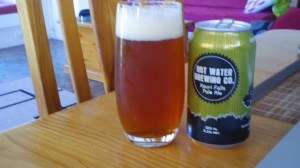 Can’t remember last time I had craft in a can.  Earthy Hop aroma, and the magic tumbler does it again with a decent head, dark orange brown pour.

I thought this was a little earthy in taste, to be honest. and a little rough around the edges. It does have a lovely hop bite though.

For me though a little rough around the edges, not enough of a body, and could possibly use some softening of malts and caramel perhaps.

The pdubyah-o-meter says that this is just gets to 7 as ‘above average’. Never going to be a great beer,  but I think that this is a great platform to leap from to better things, I like the idea they went straight to cans, a good statement, and good business sense.

I brought a 2x each of 3 cans of this and so I have another in the fridge. I don’t think that above average is going to make me dash off and get it though, I do have a couple of others too get to first.