What better way to have an evening at the beach then with a highly regarded beer, the AleSmith IPA. Brewed by AleSmith Brewing Company and styled as an India Pale Ale (IPA) and they do that in San Diego, California USA, home of SeaWorld. 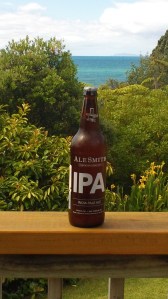 AleSmith IPA used to be known as “Irie Pirate Ale.” However, some nasty patent attorneys think the name is too similar to another brand, so we had to “cease and desist.” It’s a darn shame, but it beats an obnoxious legal battle, in both expenses and Excedrin. Don’t worry though, we won’t change the beer (which is a MUCH better IPA than that “other” brand). It was conceived as an American-style IPA to satisfy the yearnings of the most die-hard hopheads. Its high alcohol content may catch you unawares if you’re not careful, but it’s hard to resist once you’ve tasted it. Appearance: Deep golden to light amber color, and a nice beige head, with good retention when properly served. Flavor: Starts off with strong citrusy, resiny flavors, balanced by a nice malty sweetness, then fades to a dry finish with a lingering hoppiness and a faint hint of plums and black cherries. Aroma: Strong piney-citrusy character, with vanilla in the background. Mouthfeel (body/texture): Smooth, medium-bodied. Feels warm in the mouth from the alcohol. 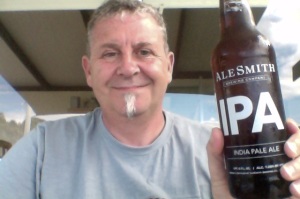 A big 650ml bottle of a 7.3% ABV beer, making it around 3.75 standard drink units in NZ. 218 calories it’s listed at, don’t know if that’s a serve, what the serve size is or if that’s  the whole bottle, it’s a new thing that the sensitives are making a big thing of. 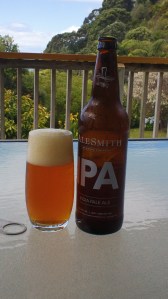 I like the idea that “a good head when served properly”.. I’m at the beach I have a tumbler for a glass, I’m hopeful if sceptical.

Has a really subtle hop aroma on opening, which it did with a gentle hiss. Pours with a really really big head! I’ve still got it! Rich orange colour, head is off white. Carries that nice aroma to the glass.

Big big hops up front, spice, low notes of grass, bitterness under the limit where it’s just a pucker up and try to enjoy, but there to be enjoyed and mmmmmdd at. Altogether a fairly decent beer.

This has a really really nice level of caramel sweet too, balances up the bitterness to give you a full mouthfeel of a medium body beer that is very entertaining on the palate.

I can tell why people think this is worthy. Far to easy to drink I find myself finishing the first half of the bottle without any effort at all. No real indication of the ABV content, which isn’t going to ruin your day per se, but will make it a hard act to follow.

The arbitrary pdubyah-o-meter says that this rates as phwoar! If you had to pick a couple of beers to spend a long time alone with I’m pretty sure this might be one of them, which might be getting a little ahead of myself.

I try to remind myself to be me, and that just because ‘the everyone’ thinks this is good that I don’t necessarily have to have that opinion. I’ve had a lot of good IPA beers. I still think they are a standard go-to beer for many brewers and that the field is dense with great versions and spins on a theme.

However to produce a beer as hoppy and at the same time as subtle as this is a thing of joy.  The Second half of the bottle poured the same as the first. Two heads one glass. That could be a thing. Couldn’t it?

So to rate this. I’m impressed. The pdubyah-o-meter makes this a 10.

There I did it I added another beer to the 10 club. This isn’t more spectacular, more hoppy, more full, it just just is a bloody good beer. Lots of nice hops, but subtle about it, a nice warm caramel thing going on, a bit of spice, pepper, citrus and a tang of grassiness, decent head, lacing in the glass.

The major problem I see with this is empty bottle, empty glass, long night ahead full of regrets and emptiness. Way to easy to drink, way to likeable, you really might enjoy this.