I write this the day after the day before.

Yesterday, the weather was average, cold and a bit showery.  But I was made to go for some exercise with MrsPdubyah, as you can see it wasn’t as flash as it could have been in the morning 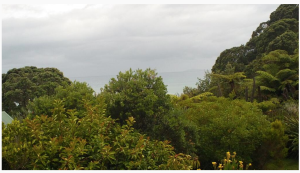 We got to the beach, Matarangi, didn’t have it to ourselves in the distance you can see another romantic couple braving the elements 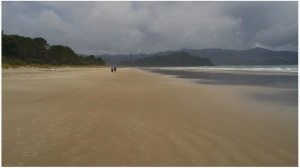 Some of the locals are more hardy, these oyster catchers for instance

To be fair there were far more people on the beach than I’m making out, they’re done the more built up area where all the beach houses are. Brave souls.

As reward I brought me two beers, one which was good the other was ok. They are local beers, so I am in a way supporting local artisans. I am not however convinced they are brewed locally, but brewed to a recipe, which isn’t unusual. I’ll need to do more ‘research’.

And then to bring it all back down we opened a bottle (gifted) of Sauv Noir, a horrific mixture of Sauvignon Blanc and Pinot Noir from Chile.  It’s as bad as it sounds. It’s not like that don’t have a decent wine trade in New Zealand. As it was a bit mardy we had a Thai Red Curry for dinner which was outstanding, and the remains of the Focaccia bread. Which now reminds me that I was supposed to make some bread for lunch. 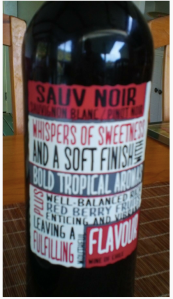 Today, Which I think is Thursday the day has dawned much brighter. There are many more boats on the seas going fishing and gathering, and MrsPdubyah is talking about a walk around the point at Matarangi to the Harbour, and I can buy more beer 🙂